It was a busy night as Salt Lake County (SLCo) Emergency and Public Works crews worked to address the results of the recent severe weather event and accompanying hurricane-force wind storms. This report serves as an update on the status of Salt Lake County’s response to this most recent emergency. We have seen a significant amount of damage throughout SLCo due to fallen trees and flying debris, principally located along the northeastern portion of the county. We also experienced widespread power outages resulting in business and school closures. Thank you to all of our community partners who have generously stepped in to provide assistance and resources.

Today, Salt Lake County issued a Declaration of Emergency (DOE) for yesterday’s high wind emergency event. The decision to issue the DOE was based on multiple concerns, including the extent of damage, anticipated need for resources, and cost of recovery. A local emergency declaration provides avenues for municipalities and counties to receive financial and material resources from the state or federal government. Salt Lake City and South Salt Lake have also issued emergency declarations.

The table below provides an overview of known damages across SLCo: 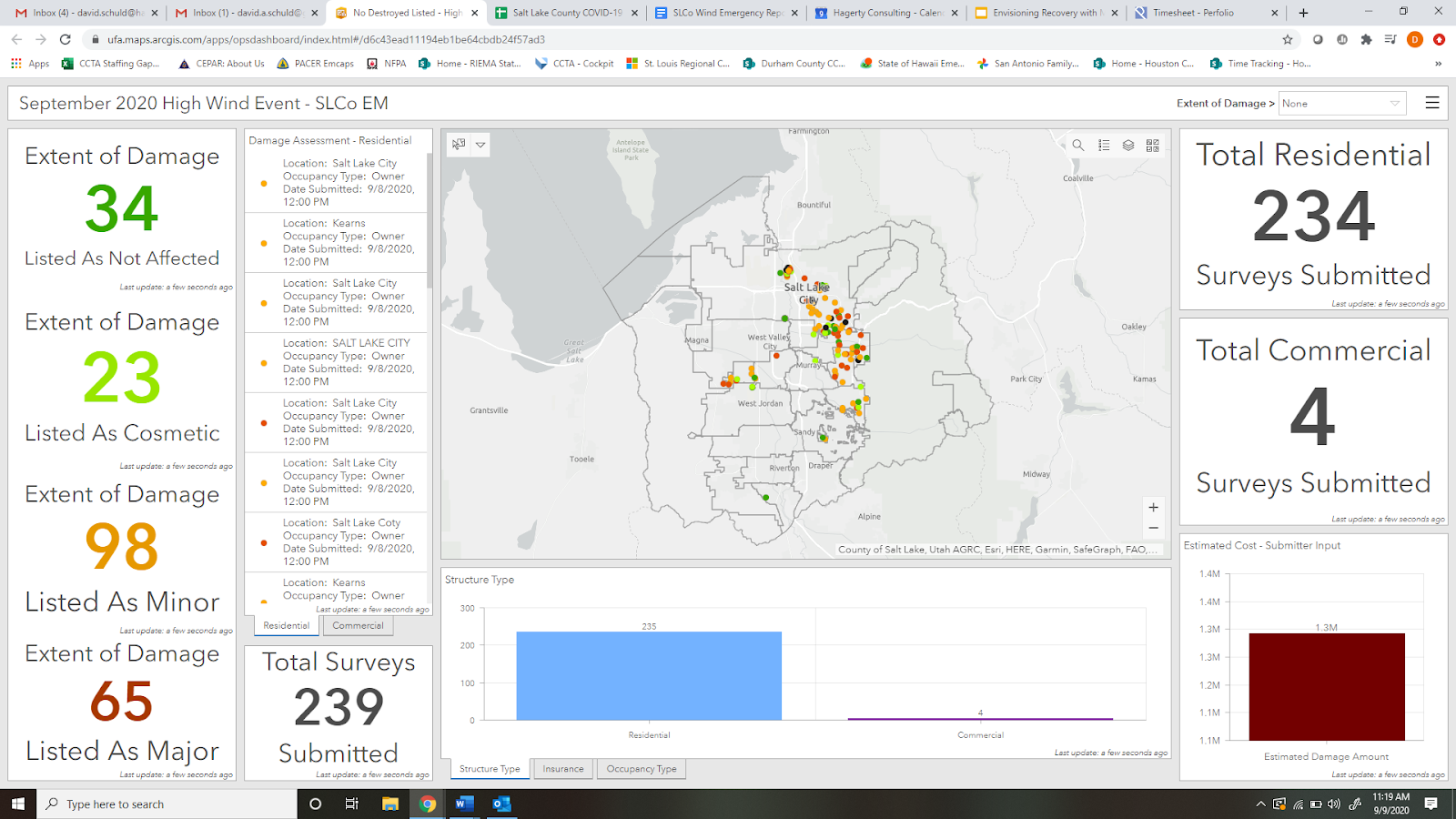 This information is being gathered through a Damage Assessment Survey created for Salt Lake County residents to self-report damage that occurred between September 8-9 at their properties due to the windstorm. The data collected will further assist SLCo and cities in coordinating resources and clean-up efforts. The number of locations reporting damage continue to increase, and we expect a fuller picture to develop over the next few days.This survey will be open to residents for a minimum of two weeks to report damage.

At present, Rocky Mountain Power (RMP) is reporting that 74,485 customers are without power within Salt Lake County. RMP is working around the clock to restore services. No definitive estimated time to restore (ETR) has been given. In general terms, RMP is reporting timelines up to 72 hours to restore power.

Areas within SLCo most heavily affected by power outages, as reported by RMP, include: Millcreek, the Avenues in Salt Lake City, the northeast section of Salt Lake City, South Salt Lake, Murray, Holladay, and northern portions of Taylorsville.

Salt Lake County Public Works maintains over 500 miles of road and has been clearing debris to provide safe travel throughout the county. Our teams will continue this effort over the coming days.

A special thank you to the cities who have coordinated and offered mutual aid. The following cities and entities have offered/provided aid under our mutual aid agreement:  Bluffdale, Herriman, Holladay, Millcreek, Salt Lake City, South Jordan, Taylorsville, West Jordan, West Valley City, and the MSD.

In collaboration with the American Red Cross, SLCo hosted three warming centers last night for those who needed refuge from the cold and the ability to power medical equipment.

This is intended to address the needs of residential/non-commercial green waste disposal for those affected by the wind storm. Please note that fees will not be waived for grass clippings or regular “junk” removal. Larger contractors and commercial haulers will be charged normal rates. The landfill will be open from 7 a.m. to 5 p.m. Monday through Saturday. For more information, contact the Salt Lake Valley Landfill at 385-468-6370.